(Yesterday's sermon - adapted for this Blog) 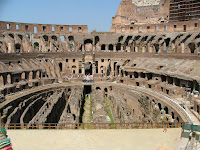 You know, asking questions is a very important thing to do. Its part of our nature to ask questions, and to wonder about things.

But sometimes, as the story of Jesus' temptation in the wilderness shows us (Matthew Chapter 4) questions are asked which are designed to trap us.

Before Jesus began his public ministry, he went into the desert for 40 days and 40 nights. This is an event that we remember especially at this time of Lent.

We might wonder why he did that - and we might ask some questions about it. Perhaps he wanted to prepare himself for the hard years of ministry that were to come? Perhaps he wasn’t sure exactly how he would exercise his ministry, and needed to get it straight in his head? In many ways, Jesus was certainly preparing himself for his ministry...and that’s why we remember this story during the time of Lent. Lent is a time when we prepare ourselves to receive the wonderful news of Easter again...the news that Jesus Christ rose from the dead.

The writer of Matthew’s Gospel gives us another reason why Jesus went into the desert. Matthew says that “Jesus was led into the desert by the Spirit….to be tempted by the devil." After not eating for 40 days and 40 nights, Jesus was very weak when the devil was finally allowed to test him - with three questions or challenges.

The FIRST challenge: "Why don’t you turn those stones into bread?"

You see, the devil was tempting Jesus to use his power to provide food for himself.

It might be interesting if I just paint a little bit of a word picture for you. Remember that Jesus lived during the time of the Roman Empire - one of the most politically and militarily powerful empires there has ever been. 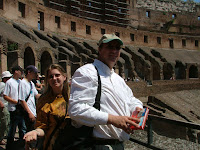 Last year, Clare, Emily and I went to Italy for a few days, and we visited the Coliseum in Rome. We were amazed at what we saw - a HUGE arena in which the citizens of Rome would watch gladiators fighting each other, and Christians being fed to the lions. Something else that used to happen at the Coliseum - and at the local horse racing arena known as the Circus Maximus - is that the Emperors of Rome would distribute free food to the crowd.

The Emperors were clever politicians. You see, they understood that simple people needed just two basic things to keep them happy - and to stop them complaining about the way the Emperor spent their taxes...entertainment, and food. Or, as the Roman expression went, “Bread and Circuses”. The Kingdom of Rome was based on Bread, Circuses and Political Power. But Jesus had come to proclaim another Kingdom….the Kingdom of God, which he also called the Kingdom of Heaven…

When he challenged Jesus to turn stones into bread, we could say that the devil was tempting Jesus to follow the Roman way…"provide food for people, and they will follow you”.

But Jesus said no. "It is written: Man does not live on bread alone, but on every word that comes from the mouth of God."

Jesus knew that food alone is not enough. If you feed someone, you only put off the time when they will ultimately die. Death is the one disease that we will all die of one day! But if you can change their heart, help them to tune themselves to the word of God, then you open up the opportunity of eternity with God in heaven. Jesus wanted his ministry to count FOR EVER, not just until the next meal.

So, the devil tried a new tack. Effectively: "Why don’t you throw yourself off the temple and let the angels catch you?" 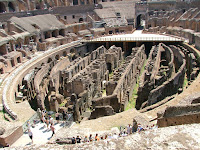 Bread...and Circuses. The old Roman trick. The devil was tempting Jesus to use his power to do amazing miracles that would wow the crowd. I mean - I’m pretty sure that if I threw myself off the top of St James after this service, and had some angels rescue me...you’d all think I was pretty fantastic. (Clare would be trying to shoot the angels mind you!).

But again, Jesus knew that amazing miracles would not turn people towards God. He knew that the changes we need to make take place on the inside, not on the outside. Faith is not about asking God to do amazing feats of supernatural wonder...its about trusting that God is in control, and is with us through every circumstance of life...the high circus-type experiences, the joy of baptism parties, for example...but also when the chips are down, and the going gets tough.

So Jesus rebuked the Devil. "Do not put the Lord your God to the test."

So the devil tried for the last time. He took Jesus to the top of a very high mountain and showed him the kingdoms of the world laid out before him.
"Why don’t you worship me...then I will give you all this!" 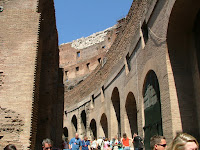 Bread, circuses...and political power. The old Roman trick again. The devil was tempting Jesus to establish a kingdom of political power. To use his power from heaven to defeat the Romans by the sword, and to raise up an army which would conquer the world. Many people expected that this was exactly what the Messiah would do.

But again, Jesus wasn’t interested. He knew that all the political power in the world would not create the circumstances that he wanted. God sent Jesus into the world because God loves people. God loves us. God has great passion for the poor. God hates war and poverty and slavery and injustice and global warming...and its right that we fight to improve the world in which we live.

But God’s overriding desire, the dearest wish of his heart is that you and me will be together forever with him, living in love and harmony...eternally in heaven. Political power - which Jesus could have just taken if he had wanted, would not bring about that essential change that God is after.

There’s another question for us here too. What system of political power does each of us willingly submit to, day by day? Is it liberalism or socialism, marxism or materialism, conservatism or consumerism? All of us, in different ways, submit to a political viewpoint, or a way of helping to make the world a better place. But the message of Jesus is this...submit to God. Submit, first, to the Lord of the Universe, and to his simple life of trusting faith. That is the way to happiness. That is the way to peace.

So what was Jesus’ response? "Away from me Satan! For it is written 'Worship the Lord your God, and serve him only!'”

In other words...what we need to do is put God first. Not bread, not circuses, not earthly power systems...God. God who made us. God who sustains us. God who has saved us through Jesus Christ our Lord.

So in this period of Lent, let me invite you to take some time to ask yourself what you are putting first in your life. What is it that you trust, and base your life on? What is the most important thing in your life?

To each of us, the invitation of Jesus rings loud and clear: come to me. "Seek first the Kingdom of God, and trust in me. I am the faithful one, unchanging, the rock of peace who will be your anchor through all the storms of life."
Posted by Tom Kennar at 3:01 pm