What is Marriage For?

Sorry - it's been another long period between blogs. In the meantime, I've been preparing for, and then helping to deliver, the annual mad-house/Summer Playscheme that we refer to round here as the "J-Team". It's been a hoot so far... I'll try to post a picture of me as "Mr Theophilus" the wise, but slightly barmy tramp-cum-prophet-cum-sage character that I'm playing throughout the week.

Anyway - onto other topics. As well as the J-Team, I have the enormous privilege this week of presiding at the marriage of three couples. It has made me think again about that fundamental question...what is marriage actually for?

The Bible starts, pretty much, with the story of Adam and Eve. In that story, God declares that 'It is not good for the man to be alone' - and so sets about creating Eve to be man's 'helper'. As with all Scripture, the context here is vital. As Mark Greene (of the London Institute for Contemporary Christianity) has observed, "the context is humankind's crucial role in the stewardship of the entire world and the creation of a community in which human beings can flourish".

The Hebrew word for 'helper' is 'ezer' - and doesn't mean supporter in that English sense of a subservient 'shouter from the sidelines'. It is much closer to the idea of someone who comes alongside another in the active solving of a problem.

The role of union, therefore, is to unite the couple in the God-given task of making the world a better place for human beings to flourish in.

That's a very outward focus - and quite different from the messages we so often here in our romantic-movie-soaked culture - a culture which has elevated 'couple-dom' as the new must-have accessory of life. Our young people have been taught, or have absorbed from Hollywood, the idea that marriage is the answer to all our personal and psychological needs. When I find 'the one', that One will satisfy my every mental, emotional, spiritual and sexual need. The 'One' will love me perfectly, soothe my worries away, heal my every hurt, intoxicate me in abandoned sexual union - always remember my birthday, and put the bins out without being asked.

Is it any wonder that so many marriages struggle when that kind of expectation is laid on couples?

Eve was not created to relieve Adam of his loneliness... he had God for that, who walked and talked with him in the garden. Indeed, as you look at the Bible overall, the emphasis is not on finding a soul-mate, or a substitute mother or father, but it is on community with God's people, and on building a community in which human beings can flourish.

The focus of the Bible's view of marriage is outward, not inward. That is why, at the introduction to the Marriage Services I will conduct this weekend I will read the following words from the Anglican Book of Common Worship: "In marriage husband and wife belong to one another, and they begin a new life together in the community. It is a way of life that all should honour"

So there.
Posted by Tom Kennar at 8:14 pm No comments:

SO, according to the latest bile to pour forth from the Mad Mullahs of Al Quaeda, a targeted attack is due on the UK because of the awarding of a knighthood to Salman Rushdie.

All major political parties have rallied behind the Government on this one - saying that the Sovereign's choices about whom she wishes to award an honour to must never be the subject of intimidation. "Freedom of speech is a fundamental freedom in this country," said Conservative home affairs spokesman David Davis.

"Rhubarb and Rubbish" says I. If 'freedom of speech' means freedom to insult whoever I want, I don't want it. Jesus' disciple (and possibly half brother) James wrote in his short letter that the tongue is an extremely dangerous thing. And he was right.

When I was a lad, they taught me that 'sticks and stones will break your bones, but words will never hurt you'. More rhubarb and rubbish. Hurtful words can be some of the most hurtful things. If you punch me, I'll recover. If you insult me, put me down, tell me I'm useless - that could affect me for life.

Of course I don't for a second think that Salman Rushdie should be hounded by fatwahs for his writings. That's an extreme reaction to a minor issue. (Does is really matter what one writer says in a novel?). But to give him a knighthood, knowing full well that it would cause offence, and lead extremists to do extremist things - was just plain stupid.

Last Sunday was Sea Sunday - a day when we remember all those mariners who ply the oceans to bring us the goods and food that we need from foreign shores - or who take our goods and sell them abroad.

Sea-farers are essential to our way of life - and always have been. Ever since the first primitive human decided to take what he had made or grown and trade it with someone across the sea, we have needed these people.

And yet, many sea-farers are among the most poorly paid workers in the world - and live in some of the worst circumstances. Many of them cannot even leave their ships to visit the ports they enter. Many have inadequate clothing for the temperatures in which they work. Others are cut off from their families for months, even years on end.

Here is a sermon which I preached on Sunday, on that topic - based around Luke Chapter 10. To read it click here. 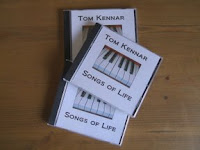 What a week it has been!

First, I performed my one man show, "Rev'd Up" last Saturday. It seemed to go pretty well - around 250 came, clapped in all the right places, and between them have given over £2,000 to support the Ugandan charities that Clare, Emily and I will be visiting in October.

In the meantime, I've preached a couple of sermons which you might want to catch up with. The first is titled "Living By Faith" - which I hope is a self-explanatory title! (It starts with a most informative and useful section of quotes from "101 Things To Do During A Dull Sermon" by Tim Sims and Dan Pegoda.) You can read it by clicking here.

The second, from yesterday, is a sermon called "The Fruit of the Spirit". What's the difference between living by human nature, or by the Spirit of God? To get thinking about that, try yesterday's sermon, which you can read by clicking here.

That's all for now folks! Have a great week!